King Tides are predictable and expected, and are natural and occur regularly, but not everyday.  While King Tides can pose challenges at times, they are easily understood and can be planned for!

YOU CAN HELP!  A little knowledge goes a long way- prepare by marking King Tides on your calendar or following Tide levels in your favorite app.

Follow forecasted tides in the City's NEW Tide Eye application, which is also available via the City of Charleston mobile app!

What Does the Tide Height Mean?

The average high tide in Charleston is about 5.5 feet, whereas during a King Tide event the high tide may reach 7 feet or higher (MLLW). 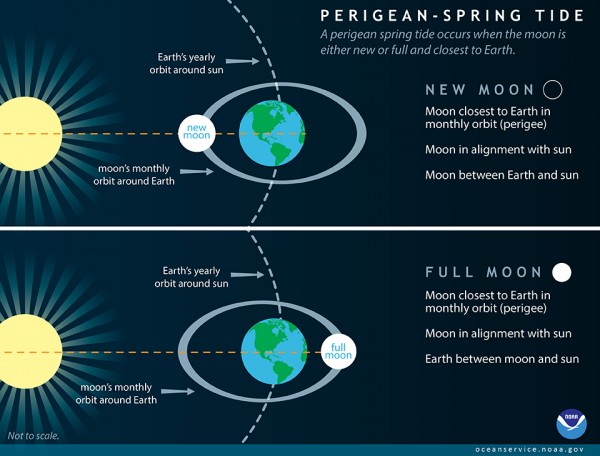 King Tides are especially high tide events when there is alignment of the gravitational pull between the sun and moon.

The term "King Tide" is a non-scientific term and describes Perigean Spring Tides, which are the highest seasonal tides that occur each year.

These tides occur when the moon is either new or full and is closest to the earth in its monthly orbit. These especially high tides can cause or worsen coastal flooding.

In order to understand Perigean Spring Tides, you first have to know that the gravitational pull of the moon and the sun cause tides. Tides are actually long-period waves that roll around the planet as the ocean is 'pulled' back and forth as the moon and the sun interact with the Earth in their monthly and yearly orbits.

In some instances, Perigean Spring Tides have coincided with a shift in offshore ocean circulation patterns and large scale shifts in wind that have resulted in unexpected coastal flooding. It is expected that occurrences of minor coastal flooding at the times of Perigean Spring Tides will increase even more as sea level rises relative to the land.