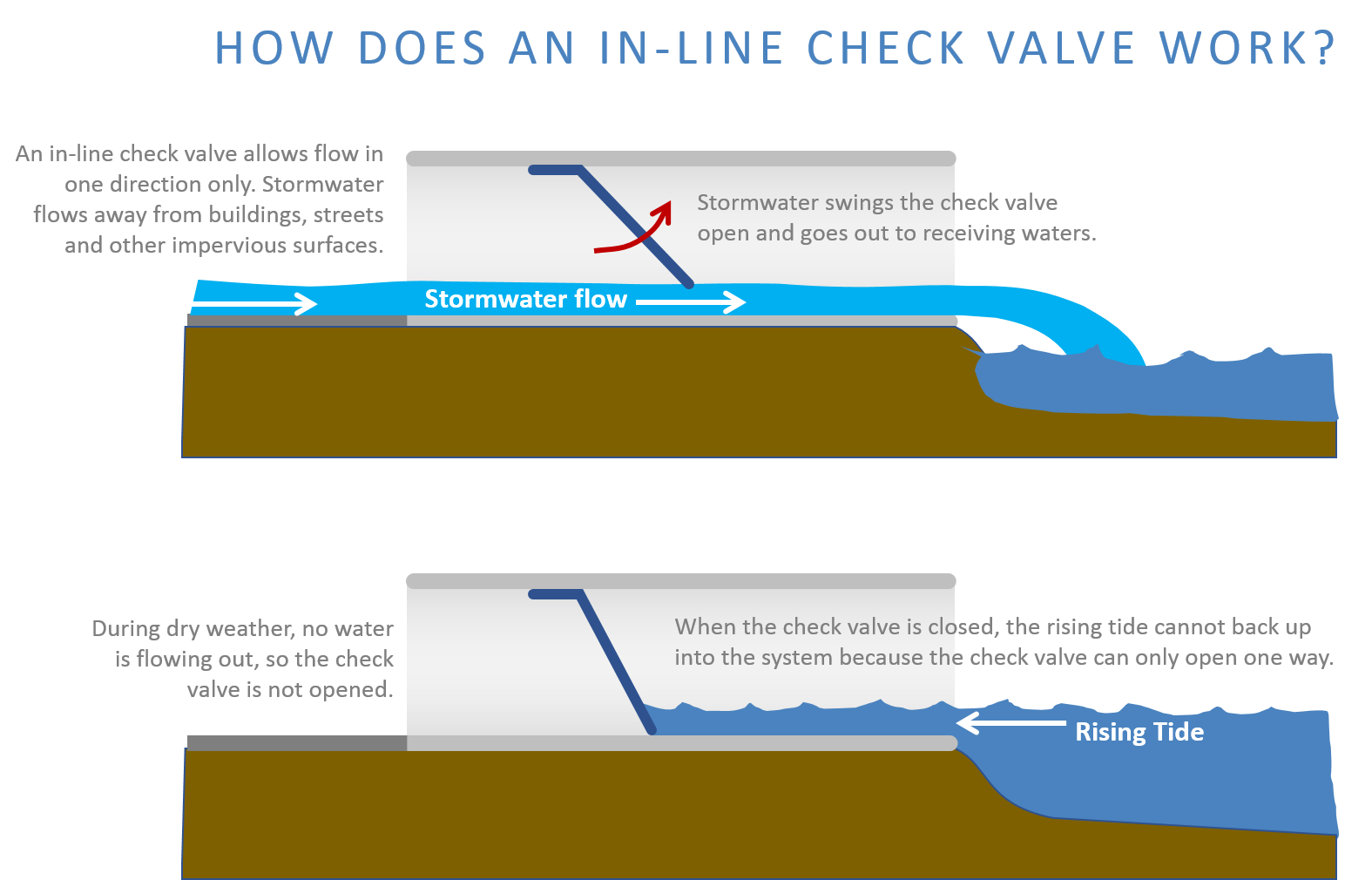 Coastal flooding (or high tide flooding) has long been common in Charleston's low-lying areas. As relative sea level rise increases, however, so too do the frequency and severity of these events, particularly the impacts this flooding has on and around streets. An effective way to manage coastal flooding from stormwater pipes is to use backflow prevention devices, or check valves. A check valve prevents seawater from backing up into drainage infrastructure to mitigate tidal flooding, while still allowing the outfall to drain stormwater as usual when the tide recedes. 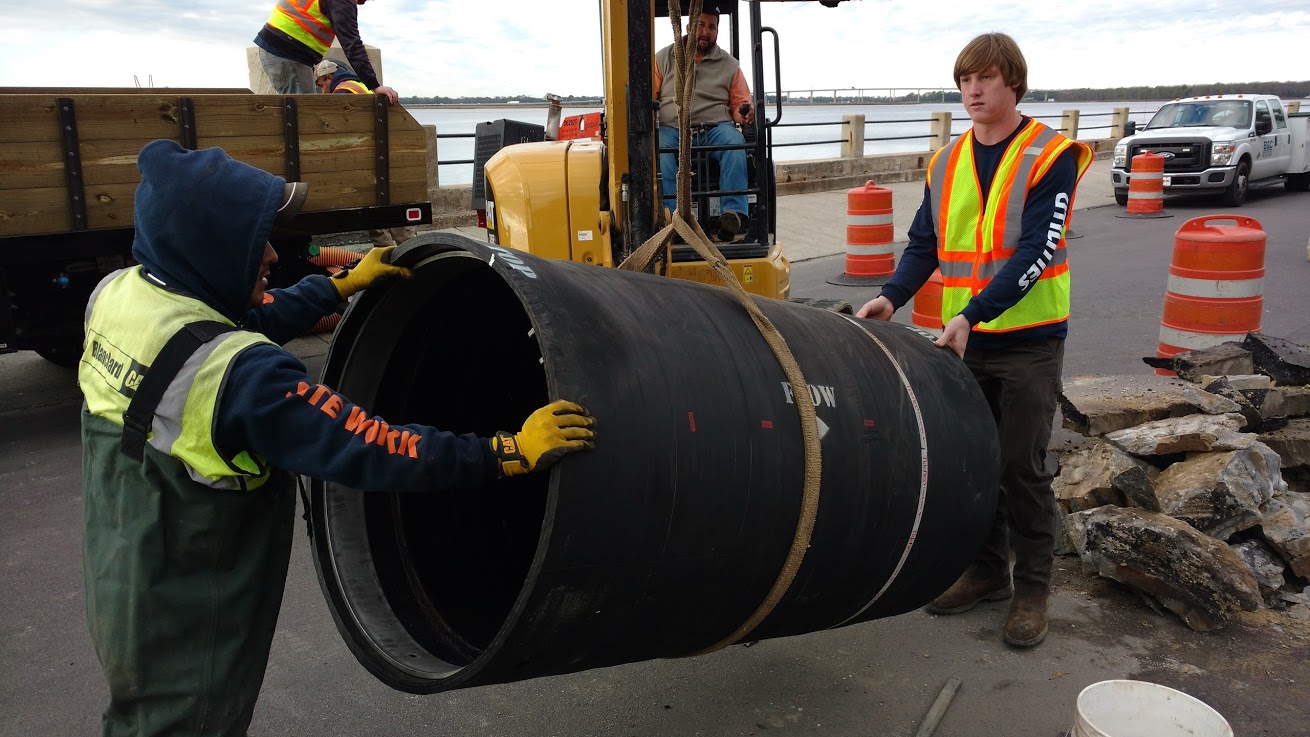 In the wake of Hurricane Matthew, much of the City's storm water infrastructure was in need of repair. One hard-hit area was the neighborhood immediately adjacent to the Battery, which had standing water for three days following the storm. There, the City discovered two 20-year-old check valves that were not opening as the tide receded. As a result, flood waters on and around Murray Boulevard were not able to drain through the valves as they typically did when a high tide receded.

After discovering the cause, the City acted swiftly to clear the Battery of flood waters by pumping the water back into the harbor as a temporary solution until the new check valves were able to be installed shortly thereafter.  This minor capital improvement is economical and has proven to be successful in mitigating this particular cause of flooding. It is also one reason why City staff have worked deliberately to identify needs and provide repairs in low areas susceptible to tidal inundation via stormwater pipes.

Further progress in this program includes a backflow preventer that was recently installed in a 12-inch storm pipe at Water Street to relieve flooding in the East Battery, much to the delight of its neighborhood association. In another example, $40,000 was allocated to install valves on Ashley Avenue and Rutledge Avenue to help Cannon Park stay dry.

Charleston has installed over 22 new in-line check valves in West Ashley and the Peninsula and has plans for more. The City intends to continue investigating how this strategy for managing tidal inundation can further be utilized in other low-lying areas in West Ashley, James Island, and Johns Island. 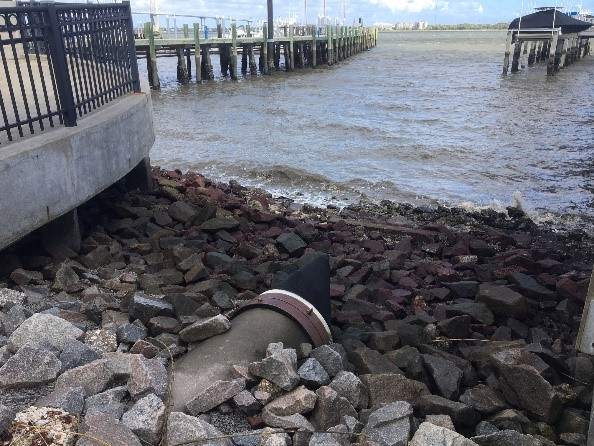 Many outfalls in the City are gravity fed and drain to bodies of water that are tidally influenced. During high tides, seawater often enters stormwater outfalls and water can back up far enough in low lying areas to result in backflow flooding on streets, even on a sunny day. Check valves can be installed in appropriate areas to prevent this tidal intrusion nuisance and protect salt sensitive vegetation near storm drains.

While check valves can work well to mitigate flooding from high tides entering storm drains, rainfall and storm surge are completely separate challenges. Check valve or not, rain that falls during a high tide still has little room to drain until the tide recedes because stormwater collected on the surface has no place to go if the pipes and ditches are full of seawater or if the check valve is in the closed position as it holds pressing seawaters out from additional ponding on streets.