The seawall work is complete with the exception of the landside posts and rails at the stairs and ramps that still need to be installed. The storm drain and sanitary sewer installation will be complete by November 6th. Work continues on the roadway with granite curb and sidewalks being installed. 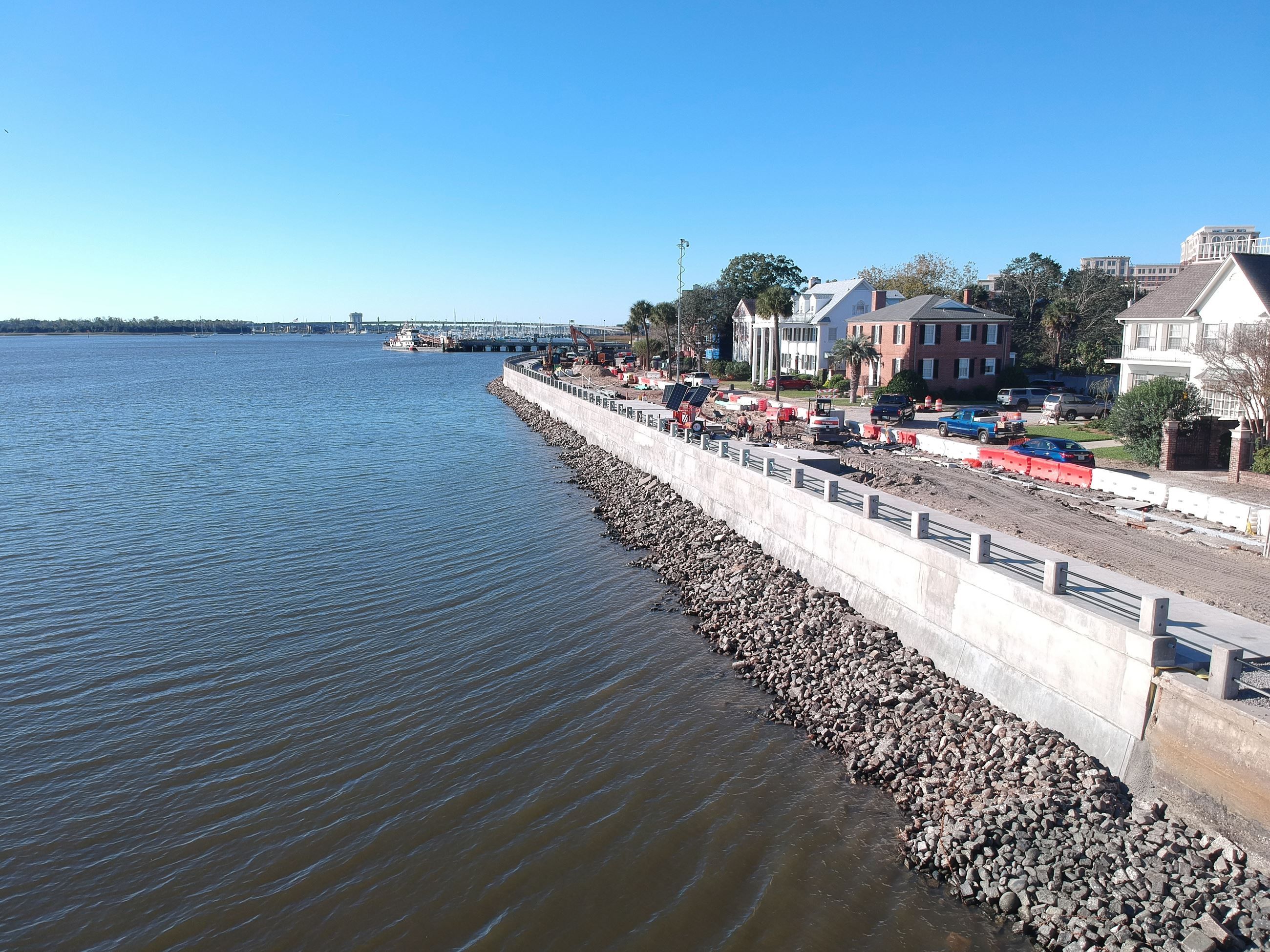 All structural concrete work on the wall and promenade is now complete. Work continues on the lower seawall face with Palmetto Gunite removing portions of the deteriorated concrete veil wall, adding new reinforcing bars and coating the repairs with Gunite. This work will continue until the end of September. Storm drainage work is nearly complete: all water quality structures are installed and the main line will be tied in at Tradd by Thursday. All that is left is connecting the laterals to the residential side inlets. Granite curb installation will begin on September 21st, followed by the installation of sidewalk and landings along the wall. 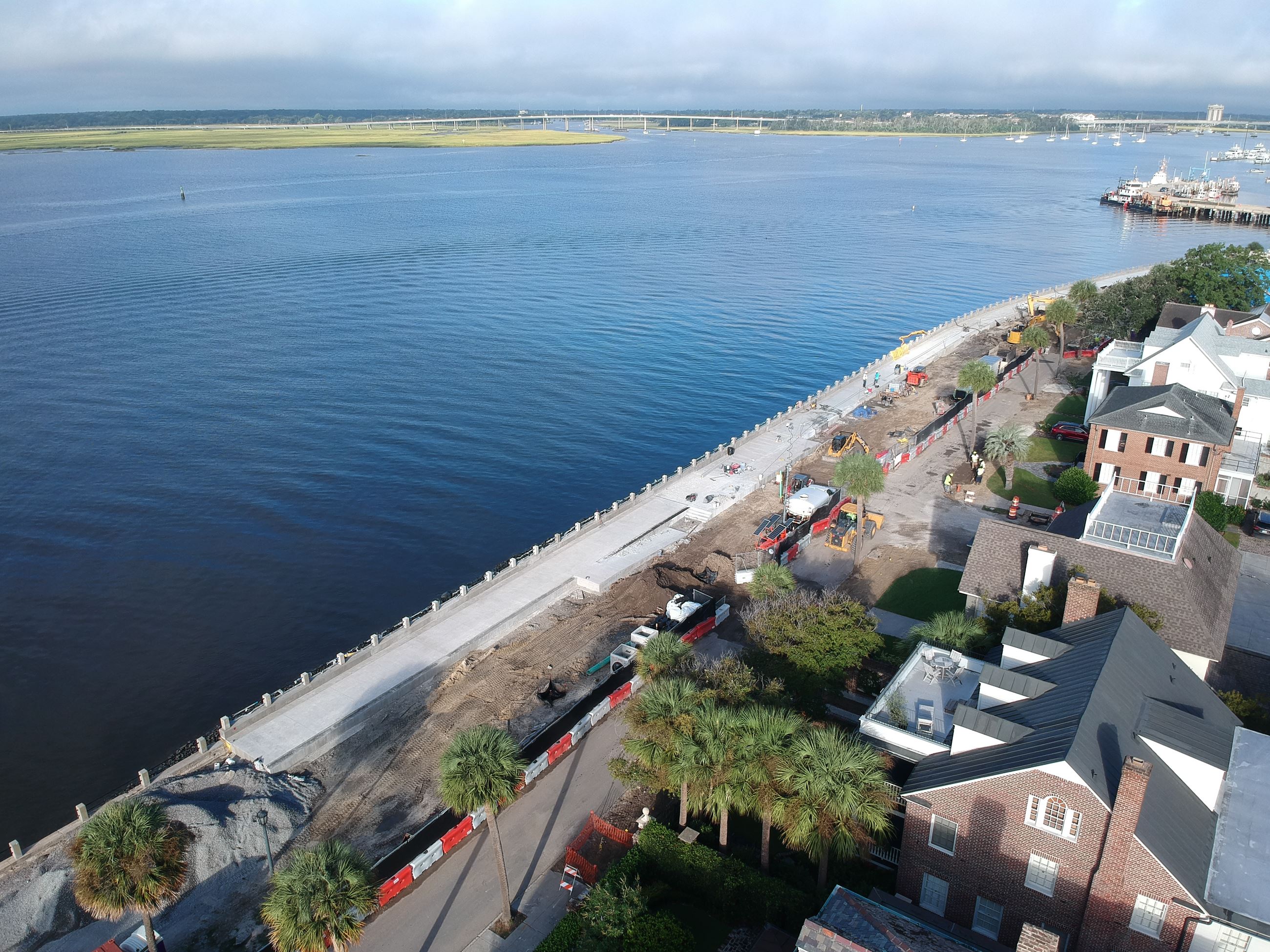 Construction company Palmetto Gunite recently finished sealing the interface between the veil wall and the vertical wall on Low Battery. They have chipped out the bad concrete, installed fiberglass reinforcements, and are coating the wall with up to 4” of Gunite. Check out this time-lapse of construction on the Low Battery Seawall starting in December 2019. 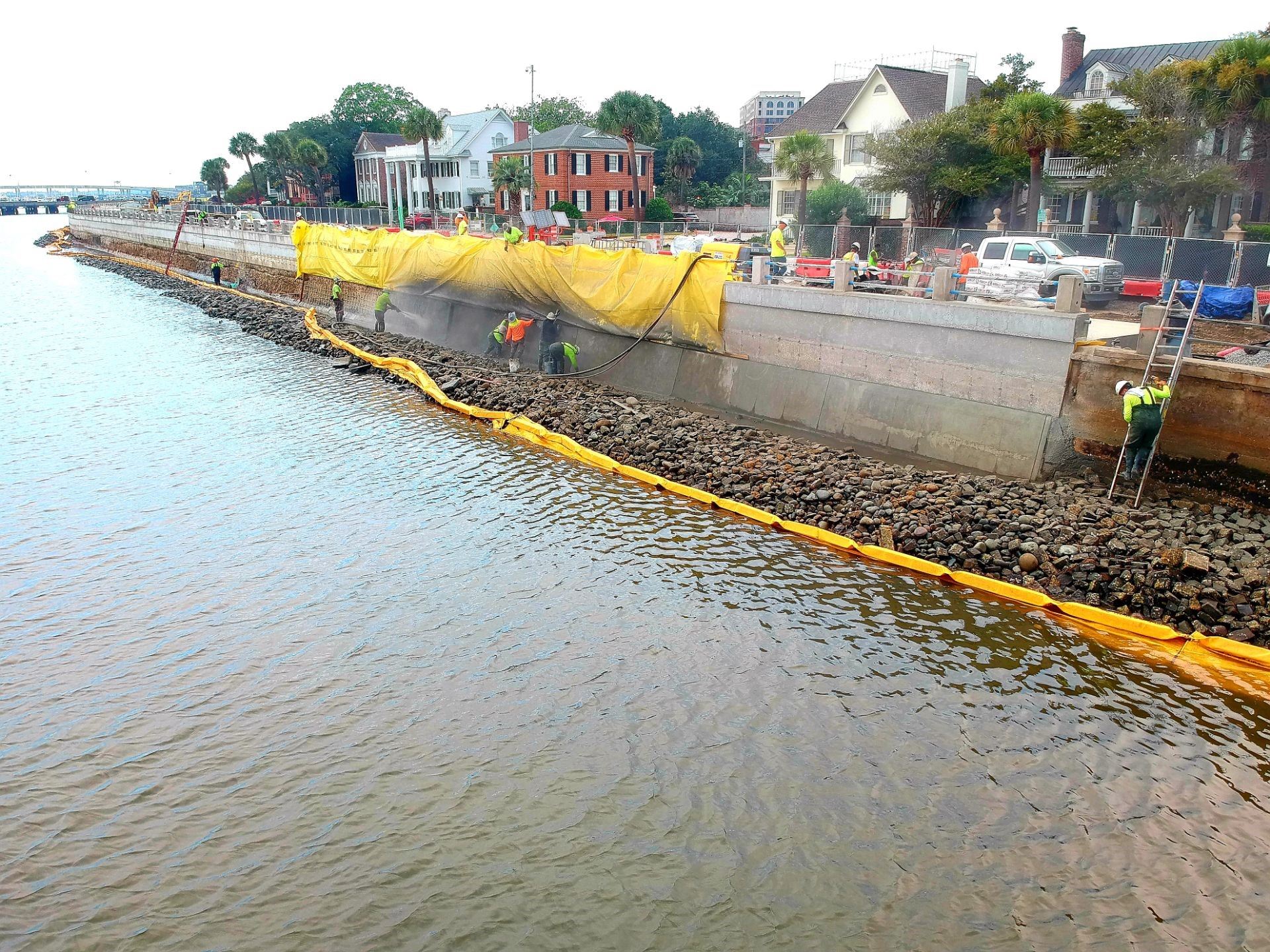 For a live look at the construction progress of the Low Battery Seawall Repair follow this link.

While much of the City has transitioned to working from home, our team has been hard at work improving the infrastructure that works to protect Charleston from flooding events. As of April 1st, teams removed the first 100’ of the existing Low Battery seawall for connection to and construction of the new seawall. This was the first 100’ of the 850’ of old seawall that will be removed and reconstructed in Phase 1 of the project. The work occurred along Murray Blvd. at Ashley Ave. and will continue toward Tradd St. For the time being, the contractor has installed temporary tide control measures to aid in the event of high tide until the new seawall is complete.

Our crews have now started the concrete pouring for the new seawall and had poured 270’ of the foundation slab, 160’ of the intermediate slab and 100’ of the top or curb wall as of April 24th. Additionally, the new water main and additional piping have been installed to replace the existing lead pipes. The last of the micropiles that will support the seawall were installed on April 30 and ground stabilization is almost complete. 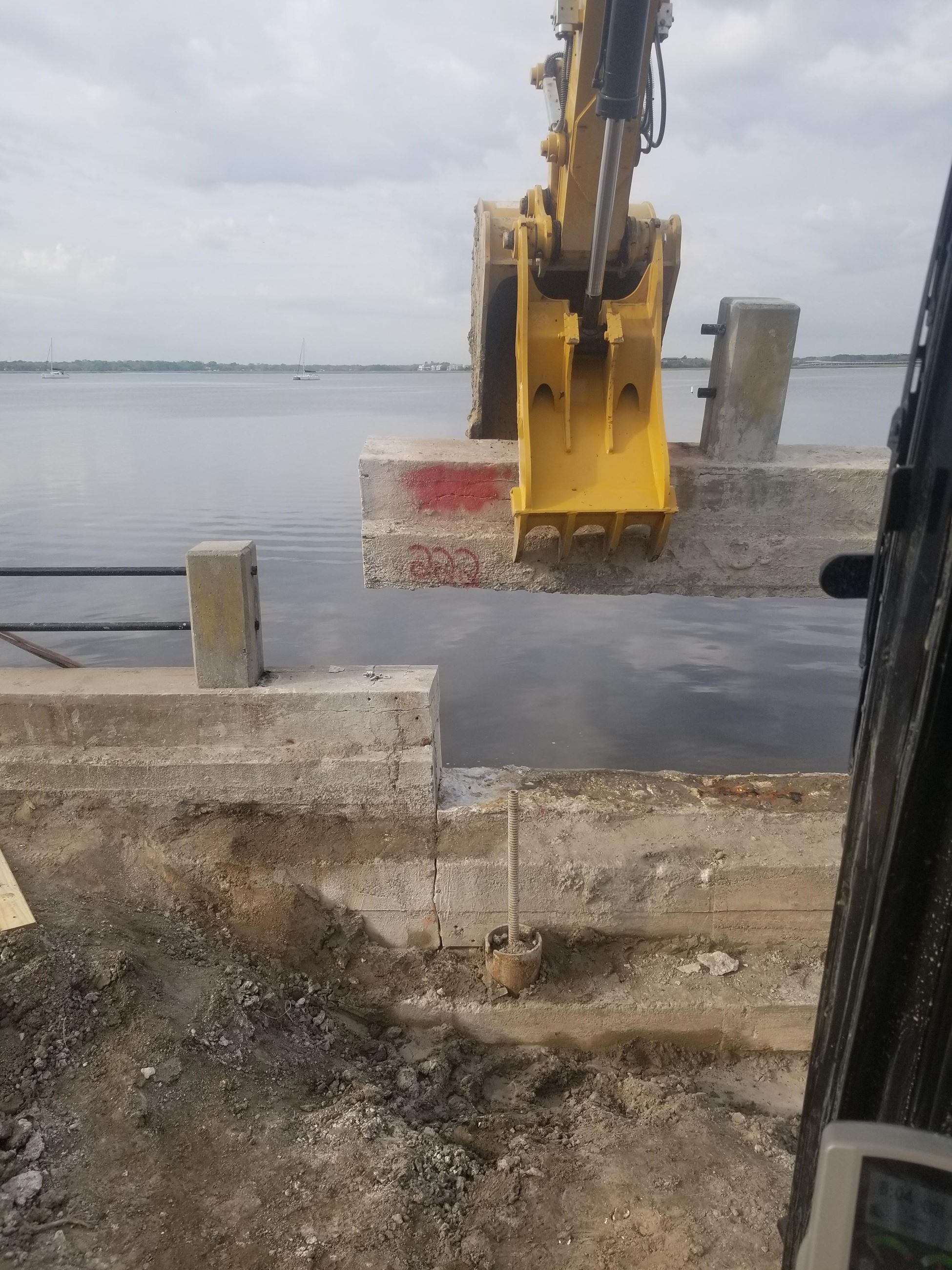 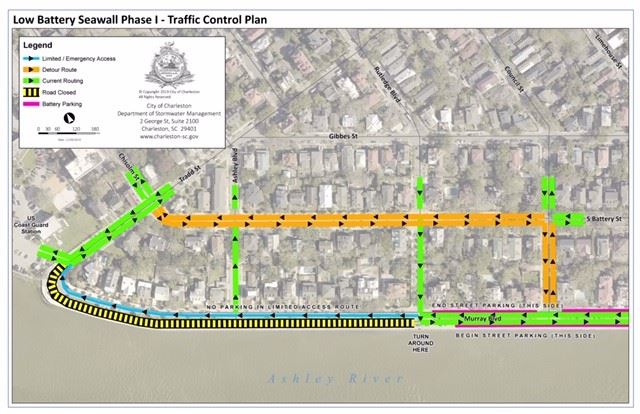 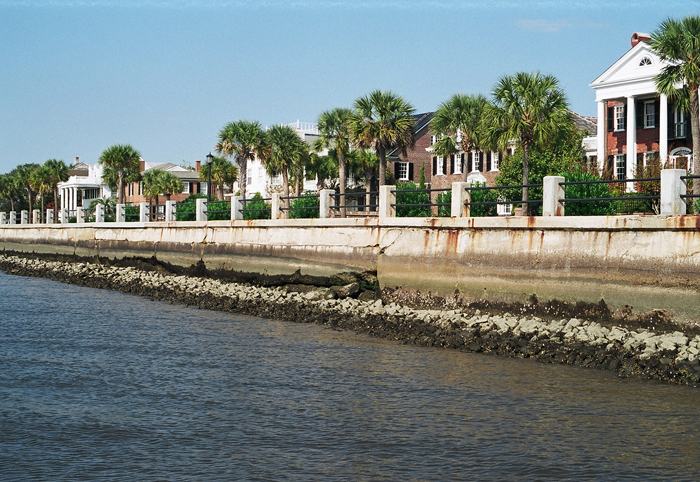 The Low Battery was constructed as part of a large land reclamation project undertaken in two phases: The first section (1909 to 1911) extended from Tradd Street to King Street. The second phase (1917 to 1919) extended from King Street to the "Turn" at the intersection with East Battery Street. The concrete wall of the Low Battery was constructed on a timber deck supported by timber pilings. The seaward face of the Low Battery is skirted with concrete panels attached to timber sheeting and batter piles. This system formed a retaining wall system to retain the landside fill.

The High Battery consists of two distinct designs: The original High Battery (reconstructed in 1893 to 1894) is comprised of a stone wall (seaward) backed by two masonry/concrete walls approximately 10 feet apart. The space between the two walls is backfilled with soil and the top is capped with stone slabs to create a walkway or promenade.

The second part of the High Battery, "The Turn," was constructed in 1919. This portion of the Battery connected the High Battery to the Low Battery, creating a continuous seawall from north of Water Street to just south of Tradd Street. Construction of the "Turn" used methods very similar to those used in the construction of the Low Battery. The repair of the "Turn" is the first phase of the overall seawall repair project and has been completed.

A "Seawall Evaluation and Study" prepared by Cummings and McCrady evaluated the condition of the Low Battery wall in 2004 and presented potential repair methods and an estimate of probable cost. Due to the time elapsed since the study was conducted, an updated evaluation of the wall and recommendations for repair/rehabilitation are required.

The City of Charleston, using the Qualifications Based Selection (QBS) process solicited statements of qualifications from individuals or firms wishing to provide consultant services for the next phase of the Battery seawall repair and rehabilitation project. Based on this detailed process, the City determined the team led by Johnson, Mirmiran and Thompson (JMT) was the most qualified to perform the requested services. The City entered into a contract with JMT to perform the initial evaluation and design phase of the project.

In May 2015, the consultant began the surveying work necessary to accurately collect data needed for the assessment and design of the seawall. Currently JMT is working on the layout and design of the wall. A new City initiative was introduced during the design phase that requires new City projects with a design life of 50 plus years to account for an anticipated sea level rise of 2.5 feet. This requirement, along with the need to reconstruct the sidewalk to meet the Americans with Disabilities Act (ADA) guidelines for accessibility, has led to changes in the design approach.

In-house charrettes have produced conceptual designs that incorporate the required elements. Once the preferred design was selected, the City held public meetings to solicit community comments on the design. The design is now complete, and all permits have been secured to begin construction. For additional information, please email the City’s project manager, Frank Newham, or call 843-724-3713.